I can do all things through Christ who strengthens me.  Philippians 4:13

Georgian Christian Channel is an Internet media group established in 2010.  It was formed by a group of young volunteers with a burning passion to serve the Lord.  Their mission is to promote free Christian media, and their prayer is to be the voice of Evangelical churches in Georgia.

It all started with a dream that one day media would speak loudly about Christian values in the country of Georgia, where the dominant religion is Orthodoxy. This dream seemed almost impossible to realize, as anything that differed from the dominant Christian Orthodox tradition was viewed with criticism, skepticism and even discrimination.  When Georgian Christian Channel (QTV.GE) first started making footprints in the country, the majority of Georgians did not know anything about Protestants.

During the six years Georgian Christian Channel has been in operation, the ministry has overcome many obstacles and faced many challenges, but one thing remains unchangeable−it has been bringing God’s Word, hope and encouragement to the people of Georgia.

There were years when the ministry worked without a studio, and without equipment. Recording and dubbing was done with borrowed equipment. However, despite much skepticism, the dream stayed alive, and today, we witness with joy, how valuable the Christian content posted on their website proves to be to the community.

In addition to spreading Evangelical media, the Georgian Christian Channel team is also involved in translation work, dubbing, charity events, and the promotion of Godly living. The group works diligently to introduce the Georgian population to Christians around the world; takes an active part in covering international Christian news; maintains a social network where different theological issues are discussed; and uses Facebook to interact with their followers.

Georgian Christian Channel Website (QTV.GE), which contains Georgian and foreign Christian news, articles on a broad range of topics, religious and intellectual videos, analyses of events from around the Christian world, biographies of well-known Christians, and materials on social topics relevant to Georgian culture and society.

Georgian Christian Channel Radio (QTV.GE/Radio), an Internet music radio station that plays foreign Christian songs.  There are very few recorded Christian songs in the Georgian language. We are praying for the Lord to bless and expand this work, and open the door to a Christian radio network providing live and archived audio news and programs, in addition to music.

Georgian Christian Channel Magazine (ქრისტიანობა), a print magazine featuring Georgian and foreign Christian news, articles on diverse topics, analyses of events in the Christian world, biographies of well-known Christians, and testimonies. (Note: the magazine has only been published twice, due to a lack of financial resources).

Georgian Christian Channel is a living evidence that all things are possible through Christ. Their passion is to live a life that glorifies the Lord, and to lead and encourage others to do the same. 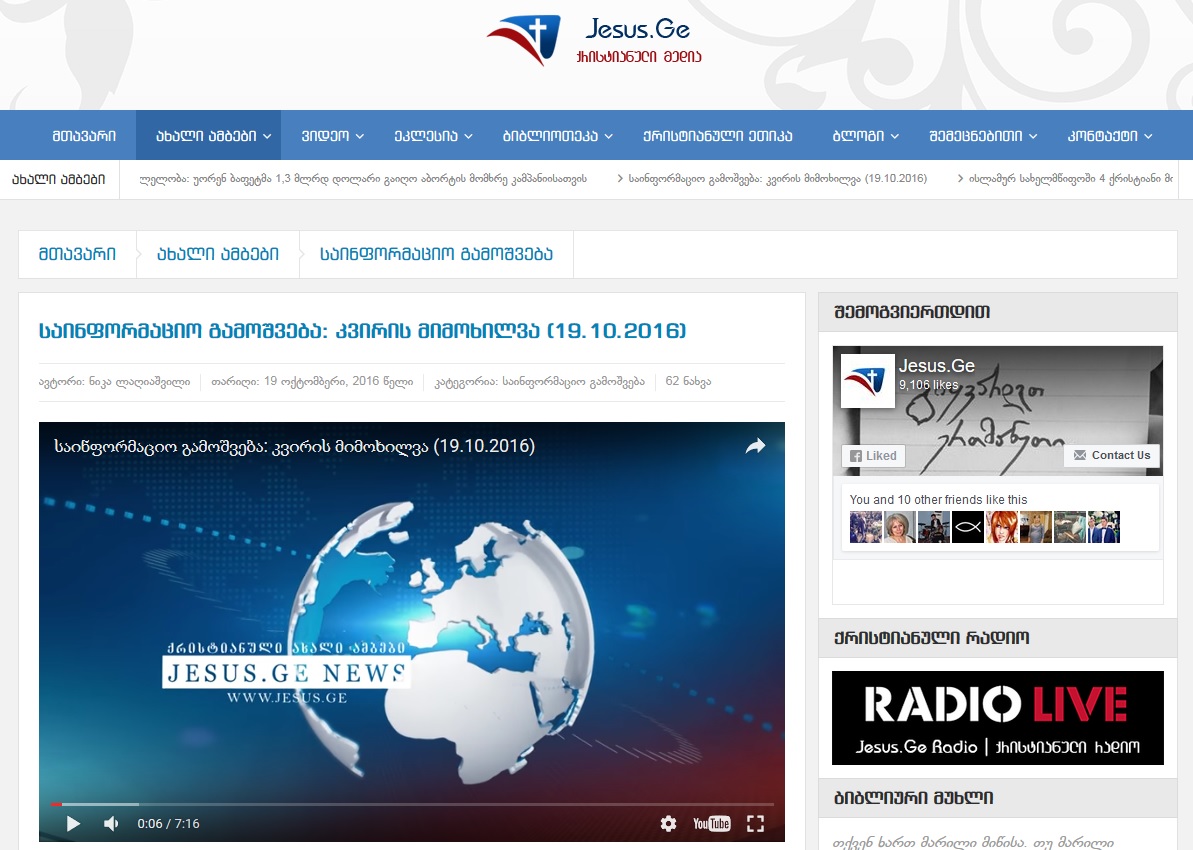 Jesus.Ge’s mission is to promote free Christian media in Georgia. The Jesus.Ge team is involved in translation work, dubbing, charity events, and the promotion of Godly living.
Read more

Be part of the legacy, and help us bring animated Bible stories into the homes of every boy and girl in Georgia.
Read more